Unleash your inner Viking and dine with the Norse gods in Valhalla in ThunderStruck 2 online video slot and you could be enjoying many chances to win real money for dessert. Framing the turquoise reels is a beautiful Norse pattern. High to medium value symbols include Thor, Odin, Loki, Valkyrie, the rainbow path to Asgard, and a Viking Dragon-Ship. There is also a logo Wild and Thor’s hammer acts as the Bonus Scatter. Even the Norse gods enjoy playing cards as the symbols of lower value are represented by A, K, Q, J, 10, and 9. ThunderStruck 2 slot has impressive and vibrant visuals and the symbols become electrified into life upon winning formations. There is a soothing background music that enhances the mystical and mysterious quality of the theme and this blends beautifully with the sounds upon wins that bring excitement to gameplay. The feast of the gods is happening at Giant Casino, so bring your Viking drinking horn and also appetite for many opportunities for generous payouts. 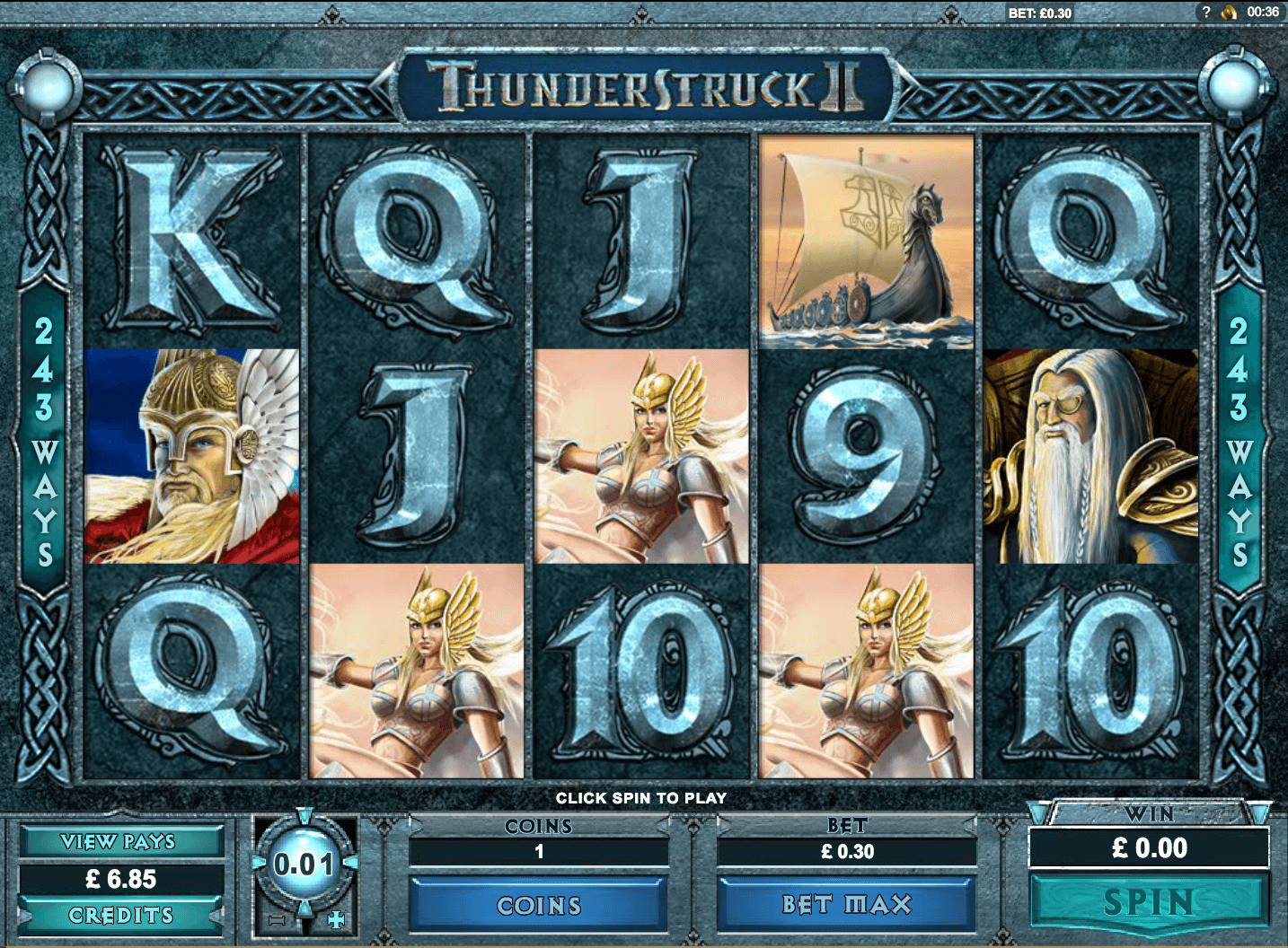 ThunderStuck 2 online slot has an epic and straightforward gameplay with exciting features. You can display your Viking power over the 5 reels, 3 wager rows, and 243 ways to win. The logo replaces all other symbols, except Thor’s Hammer Scatter, to double wins. There is also a randomly triggered ‘Wildstorm’ Feature that strikes to transform up to all 5 reels into Wilds. This can create many combinations for major rewards. This is largely because the logo Wild is the highest value symbol with 5 on the reels awarding an amazing 1,000 coins. This is followed by 5 of Thor who generously awards 500 coins.

Betting has a versatile range in ThunderStruck 2 slot game from 30p to £75, with a coin value between 0.01 and 0.25. If you want to set the spins to Viking Speed, simply set the Quick Spin for faster gameplay and therefore faster potential wins to be collected.

If you are flying with one of the Valkyries, you can still play ThunderStruck 2 online as it’s nicely designed as a mobile slot. 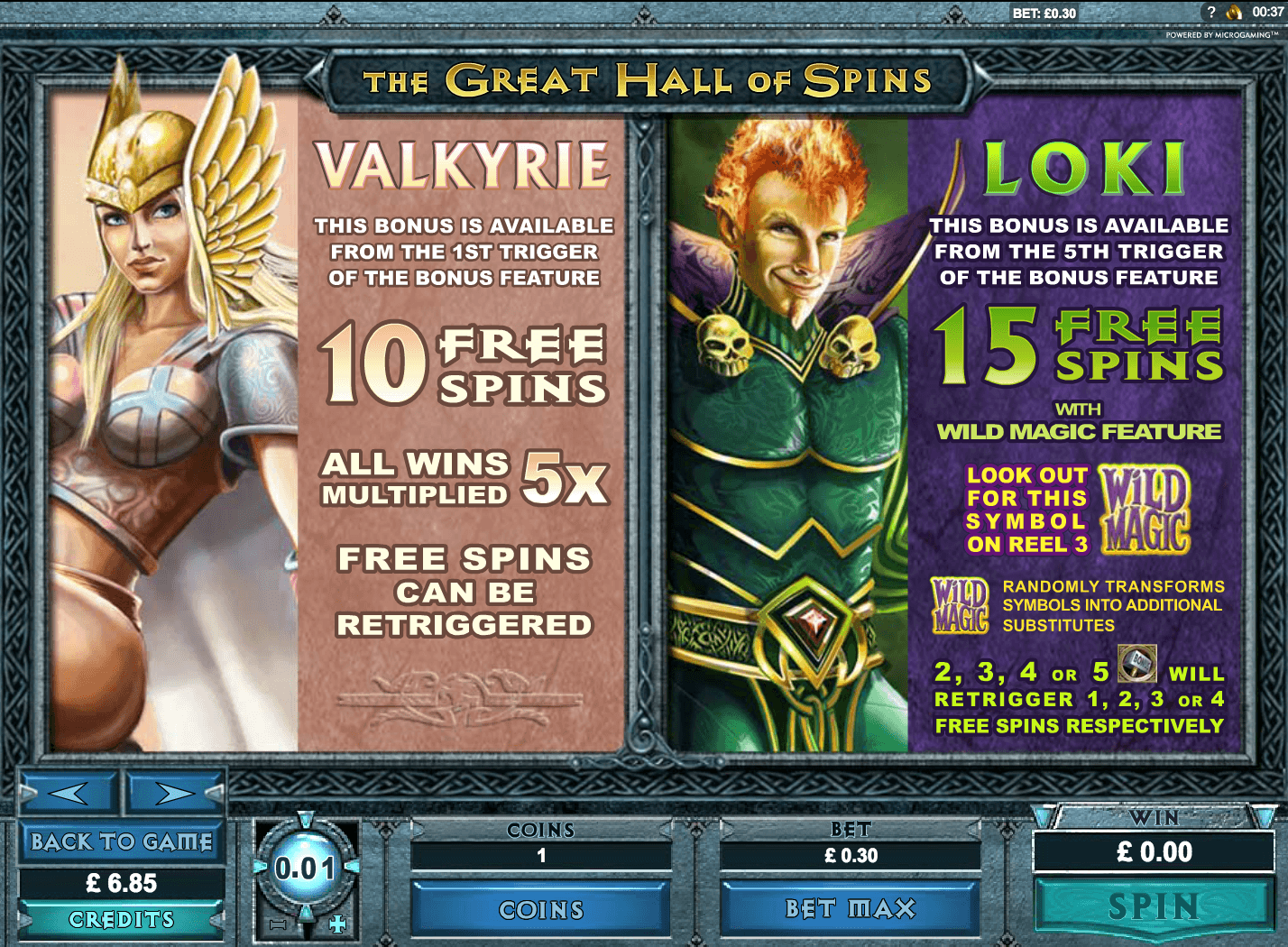 At least 3 Thor Hammer Bonus symbols launch the ‘Great Hall of Spins’ Round. And the more times you enter the Hall, the more bonus features and greater awards will be unlocked. Valkyrie is awarded from the 1st trigger with 10 Free Spins, all wins multiplied by 5x, and a potential retrigger if 3 or more Scatters appear. Loki arrives on the 5th trigger of the Round to award 15 Free Spins with a Wild Magic on reel 3 that creates extra Wilds for doubled wins. Another 2, 3, 4, or 5 Scatters win 1, 2, 3, or 4, extra spins respectively. Odin appears on the 10th trigger awarding 20 Free Spins with Ravens that fly onto the reels and turn symbols into 2x and 3x multipliers (6x multiplier if both Ravens land together). Thor is worth the wait as when he appears on the 15th trigger, you’ll win a generous 25 Free Spins with Rolling Reels. This involves winning symbols disappearing so more symbols can fall into the empty space for more potential winning combinations. Therefore, you can enjoy multiple awards on a single spin. Moreover, each consecutive win for Thor increases the multiplier from 2x to 5x. 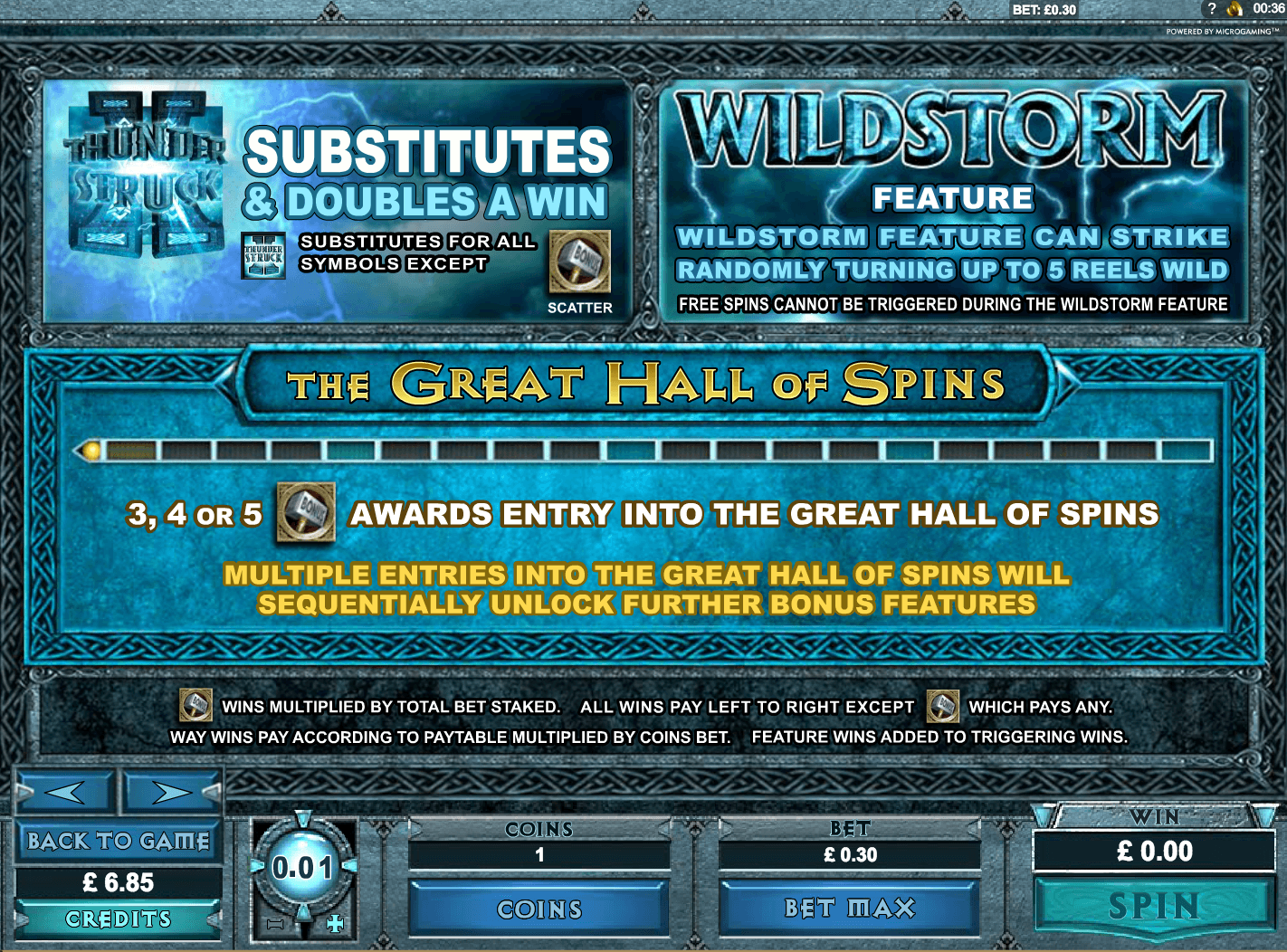 Microgaming has certainly paid homage to the Norse gods in designing the creative ThunderStruck 2 online slot and have also consistently honoured the gods of the slot world by developing the most popular titles in the industry. Players of online casino UK have always relied on Microgaming to produce slots that engage and excite with visuals and immersive gameplay as well as generously offering many chances to win. At Giant Casino, a wide-variety of Microgaming titles can be played such as ‘Mega Moolah’, ‘Immortal Romance’, and the first installment ‘ThunderStruck’.

With many exciting features, and bonus offerings that keep getting better with more gameplay, ThunderStruck 2 slot has a theoretical RTP of 96.65%.