Take an adventure on an exotic African safari in Mega Moolah online video slot where the friendly and comical animals are nothing to fear as they are generous with many chances to win real money. It’s sunset behind the reels on the breathtaking savannah, as the sky is beautifully lit orange and trees grow nearby. Your animal friends compose the symbols of high to medium value: an Elephant, a smiling Bison, a grinning giraffe, and a gazelle with horns. The Wild is represented by a Lion and a purple monkey makes the Scatter. Standard playing cards A, K, Q, K, and 10, compose the symbols of lower value. Mega Moolah online slot has a playful, childlike quality that is captured by the colourful cartoon illustrations. The animals also come alive upon wins and celebrate with roars or other noises. The song of birds and noisy insects makes you feel as if you are really on safari. All the animals and many chances for generous payouts can be seen hopping at GIANT Casino, so practice your fiercest roar to be crowned leader of pack and the slots. 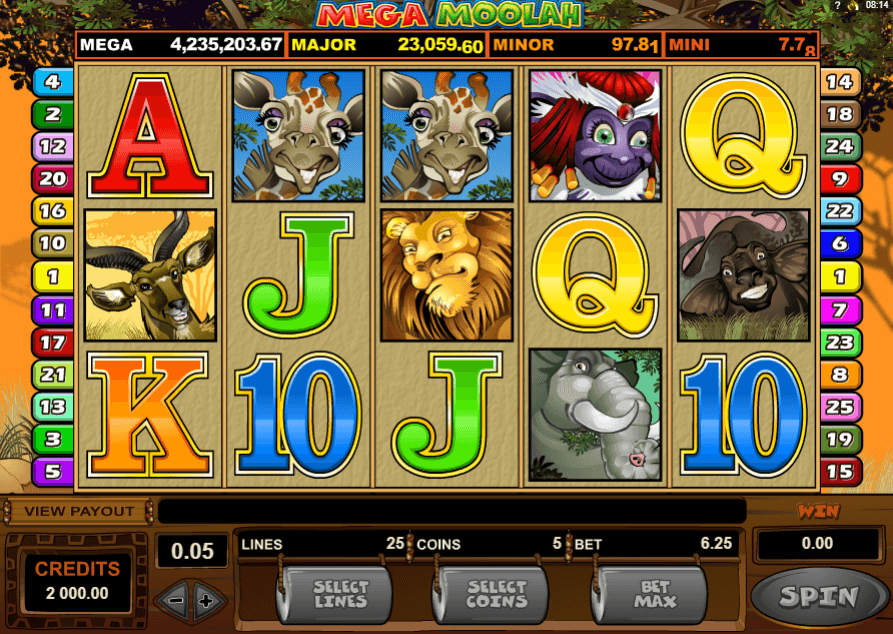 The features and gameplay for Mega Moolah slot game is fun, playful, and straightforward. The 5 reels, 3 wager rows, and 25 paylines, may have you excitedly laughing like a hyena. In both the main and bonus game, there are 5 Progressive jackpots displayed just above the reels to be randomly won: Mini starts at 10 coins, Minor begins at 100, Major starts at 10,000, and the amazing Mega Jackpot begins the award at an exciting 1 million coins. Spinning the randomly triggered Jackpot reels decides which amount you will be awarded. The Lion as the Wild substitutes for all other symbols, except Scatter, to complete wins. If 5 of the Lions prowl on the reels, you’ll be awarded an exciting 15,000 coins.

Mega Moolah slot has a relatively modest betting range from 25p to £6.25. If you’re busy applying bug spray or sunscreen for the safari, set the AutoPlay for uninterrupted spins.

You can also play Mega Moolah online slot from the local watering hole as it’s fully compatible as a mobile slot as well as on tablet and desktop. 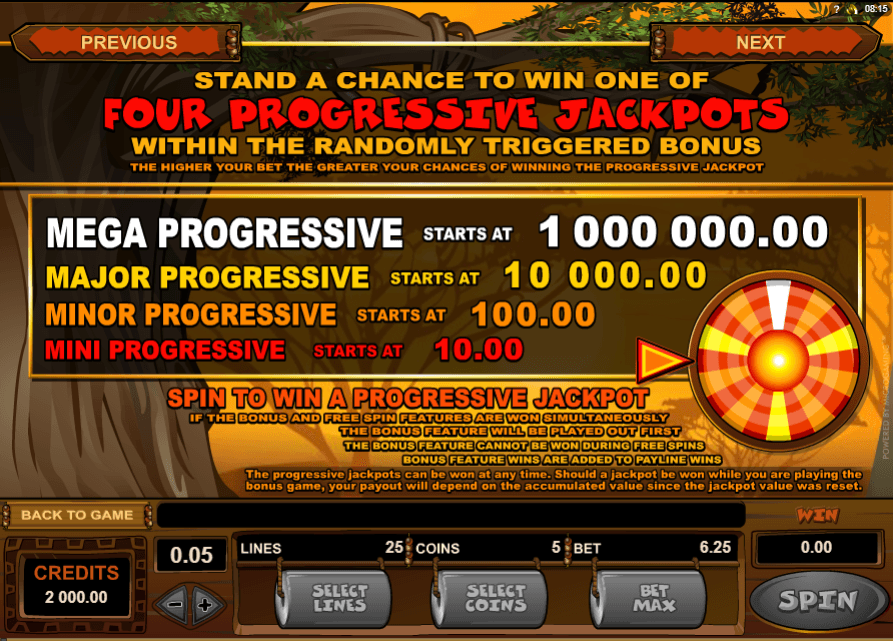 If 3 purple Monkey Scatters hop on the reels, the Bonus Round is triggered, and you will enjoy 15 Free Spins. Further, you will be awarded a 3x multiplier for every win during the round. The Round can also be retriggered with 3 or more Monkey Scatters. 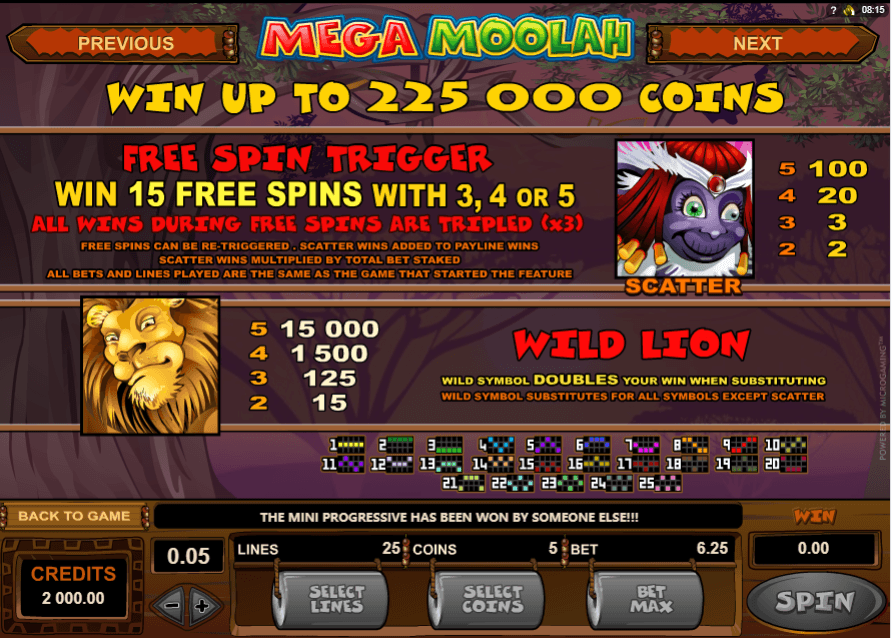 Microgaming, one of the biggest names in the online casino industry, were certainly doing the jungle boogie while designing the fun and exotic Mega Moolah slot. Microgaming consistently creates titles that excite with generous bonuses, engage with unique gameplay, and impress and immerse with stunning visuals. Players of online casino UK can enjoy other Microgaming titles at GIANTCasino.com such as ‘Immortal Romance’ and the Viking themed ‘ThunderStruck II’.

While Mega Moolah slot has a relatively low theoretical RTP of 88.12%, the generous bonus round and potential for a major jackpot win makes up for this.