In Easter Island online video slot, you are greeted to the sunny, tropical island by 2 comical and cheery Moai statues planted on either side of the reels. Don’t worry about them being stone-faced as they are happy to reward many chances to win real money each time they open their mouths. Under blue skies, butterflies flutter around flowers growing from lush green grass. Occasionally a pelican pokes its head from behind the reels or one of your statue friends. High to medium value symbols are represented by the island’s animals: a red eagle, an orange fox, a green frog, a purple lizard, and a turquoise iguana. There is also a golden relic Wild symbol. Of lower value are standard playing card symbols of a heart, a diamond, a club, and a spade. Visually, Easter Island online slot impresses with immersive and beautiful graphics in a cartoon, comic style as well as very creative animations during gameplay. For example, with each win the upbeat Moai statues celebrate and suck up/spit out symbols onto the reels. The playful, tropical quality is further enhanced by the cheerful background music and the sound effects per spin and win. Your boat to paradise in Easter Island slot leaves from GIANT Casino, so hop aboard as many exciting chances for generous payouts are waiting when you come face to face with the friendly statues. 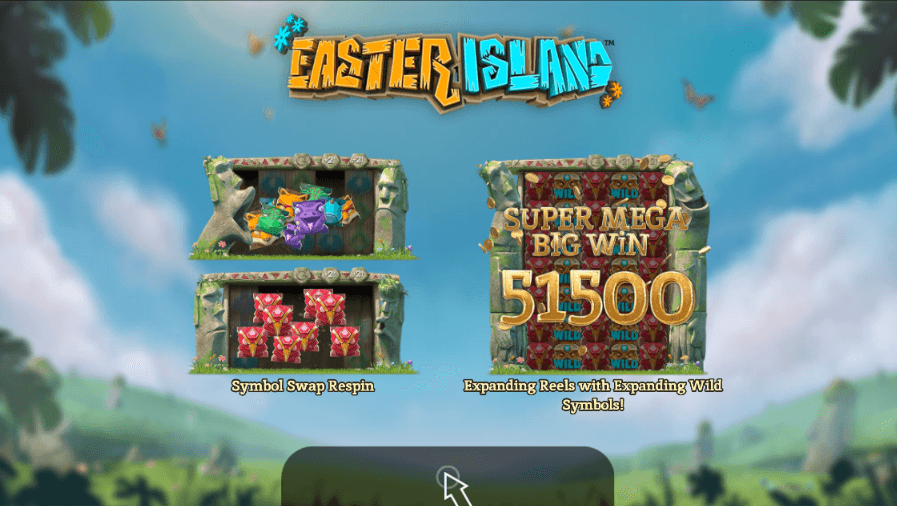 Easter Island online slot has a playful, easy, and immersive gameplay. With 5 reels, 3 wager rows that can expand, and up to 103 ways to win, you may happily become a permanent neighbor to your island statue friends. The Wild symbol appears on reels 2 and 4 to replace all other symbols to award wins. Even more exciting is the ‘Expanding Wilds’ feature whereby any Wild on a winning spin will become sticky and expand to cover the whole reel, therefore creating more winning combinations. In the main game, every win not only triggers a free re-spin but also activates a ‘symbol swap’. One statue sucks-in the low value symbols and, when the reels stop, the other statue spits out higher value symbols for more chances of bigger payouts. If 5 of the red eagles are spat out on the reels, you will be awarded an exciting 500 coins. The free re-spin only sweetens this win as you could be enjoying multiple, exciting awards on just a single spin.

Betting in Easter Island slot has a versatile range from 10p to £200. If you need some time to hike the beautiful island, set the AutoPlay for 10 to 1,000 continuous spins.

You can even play Easter Island online while on your hike as it’s beautifully designed as a mobile slot. 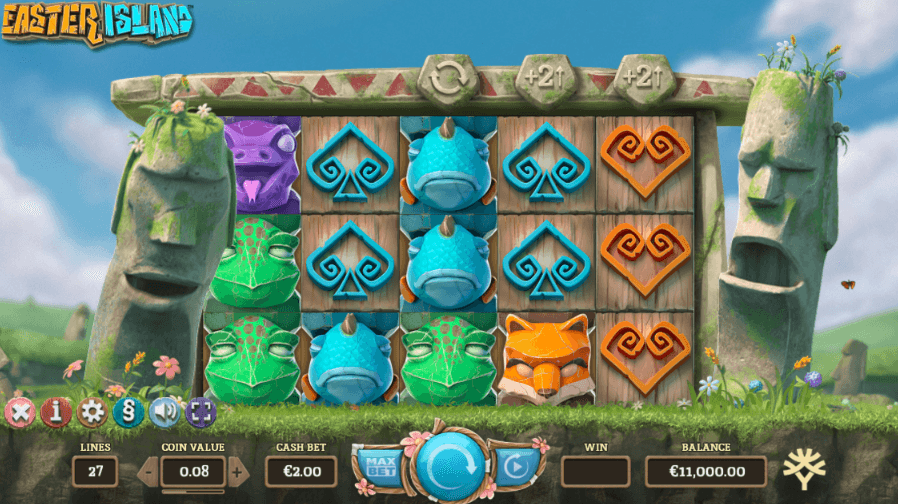 While Easter Island slot does not have the conventional Bonus round activated by 3 Scatter symbols, there is an exciting Expanding Reels feature that is triggered upon wins. When 4 matching symbols appear on the reels, the reels will expand to 5 rows for a free re-spin with 65 ways to win as opposed to the base game’s 27 paylines. When 5 matching symbols are won, the reels grow even higher to 7 rows and yield 103 ways to win for the re-spin. Expanding Wilds can also occur to potentially create many combinations for major payouts. In fact, the maximum win possible from a given spin is an amazing 47,000 coins. 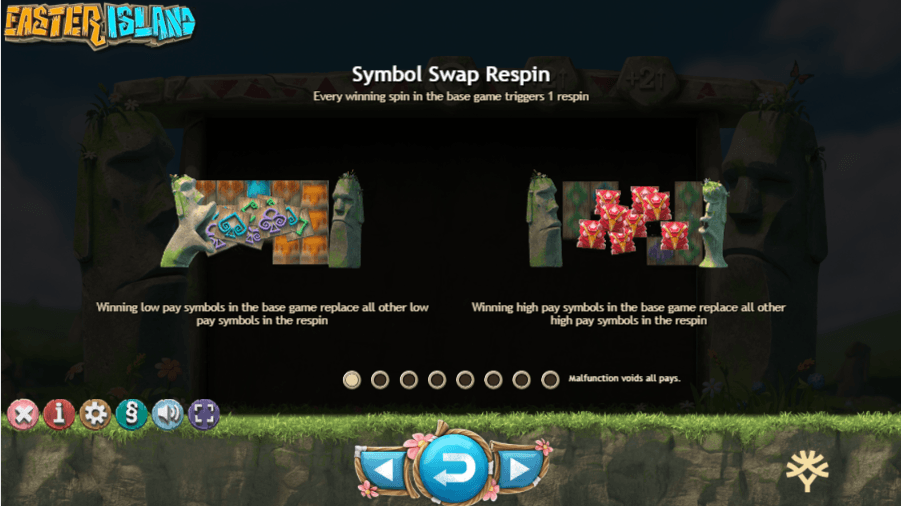 To do field research for Easter Island slot, the talented team at Yggdrasil could have taken a trip to the beautiful pacific paradise to speak to the Moai statues and learn of their mystery. Yggdrasil considers itself “an established underdog among GIANTs” but, because of their focus on stunning visuals and exciting gameplay, they have become a recognized and respected name in the online casino games industry. Fans of online casino UK can find a similar themed title in Yggdrasil’s ‘Big Blox’ and ‘Gem Rocks’ and may also enjoy ‘Bicicleta’ and, available to play at GIANTCasino.com, ‘Vikings go Bezerk’.

Since Easter Island online slot has Expanding features both in Wilds and in the reels themselves as well as free re-spin per win, the theoretical RTP is estimated at 96.1%.